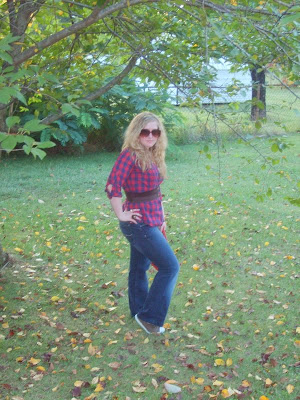 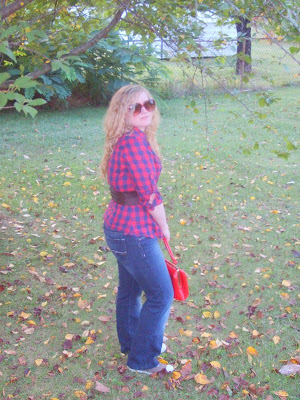 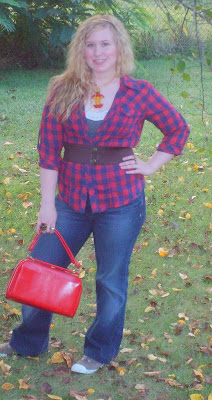 Plaid is something you can wear anytime, but it always feels most appropriate in the fall. This red and blue plaid ¾ length sleeve shirt I’ve had for a year. I got it at JC Penney’s for about $15. Underneath it, I have on a grey camisole with lace edging from Old Navy. I picked up several of these, on sale, for $5 earlier this year.
The jeans I’m wearing here are Lucky brand, but I actually found them up at Dillard’s. Lucky jeans are really expensive, but if you buy them in a department store, they’re usually discounted some. These were about $75. I had never paid that much for jeans before I bought these, but I love them and they’re worth it. They’re the softest dark denim I’ve ever had. The cut on this particular pair is Stark Sweet n Low. The fit may look slightly different on me than on some people because I always have to have my pants hemmed. This cut is generally a little more flared than it looks like when I wear it.

These are some up-close images of the details on the belt I was wearing. It actually came with a faux-denim dress I picked up at JCPenney's about a month ago. 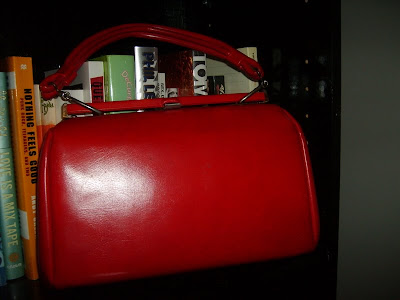 This red vintage purse was another thing that actually belonged to my grandmother. I'm pretty lucky to get passed down some really great pieces.

This is the jewelry and the headband I wore today. I'm crazy about headbands right now. The one in this picture is actually more of a mat gold than it appears. I got it a five-pack of these skinny headbands in different colors at Rugged Warehouse for about $3. The leather apple necklace is vintage and was my mom's in high school. It's actually kind of worn in the middle because she used to bend it constantly. The gold stud earrings are originally from Urban Outfitters, but I found them at Rugged Warehouse for $4. The ring on the far left is another vintage piece from my grandmother. It's missing a few stones, but I can't complain. The picture really doesn't do it justice. It has a beautiful leaf pattern all around the stones. The two-finger "love" ring is from Charlotte Russe ($4). The L actually broke off it and I had to glue it back together. The ring on the far right is a plastic mixture of brown and gold. It reminds me of a lot of plastics from the '60s. It's also from Charlotte Russe ($4). The gold hammered bangle I wore came in a set of three (with a silver and a copper) which I found at Rugged Warehouse for about $4. 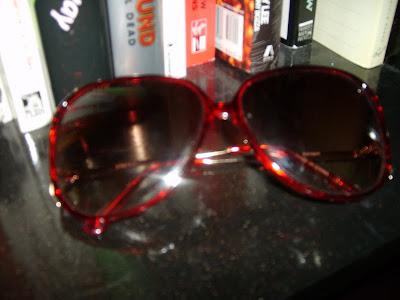 Finally, these red-framed sunglasses I bought at Old Navy about a year ago. They were on sale for $3.99, so I got them in a few different colors.


Also, the brown tennis shoes are something I found on sale at Old Navy for $4.99. They're slip-ons so I've been wearing them a lot lately.

Since there's not a good video of Ben Lee's "Apple Candy"...

Advertise with Brass in Pocket